The City of San Leandro is in the process of developing approximately 75 acres of its 950 acres of publicly owned shoreline.

The Monarch Bay Shoreline Development Project is a planned development along the northern portion of the San Leandro shoreline, which has a vision to create a regional destination that connects the community with the Bay and provides enhanced recreational and community amenities.  The public-private partnership with Cal-Coast Companies is planned to include up to 500 new housing units for families and individuals of varying incomes, a hotel, restaurants, small retail space, new open space and an extension of the San Francisco Bay Trail.

The community is  invited to join at upcoming Planning Commission and City Council Public Hearings on the Planning Entitlements for the Monarch Bay Shoreline Development Project!

Work Sessions:  The Planning Commission/Board of Zoning Adjustments and City Council received updates and held work sessions on the planning entitlements for the Monarch Bay Shoreline Development, including information on site plans and design details for the new hotel, housing, restaurant and market. 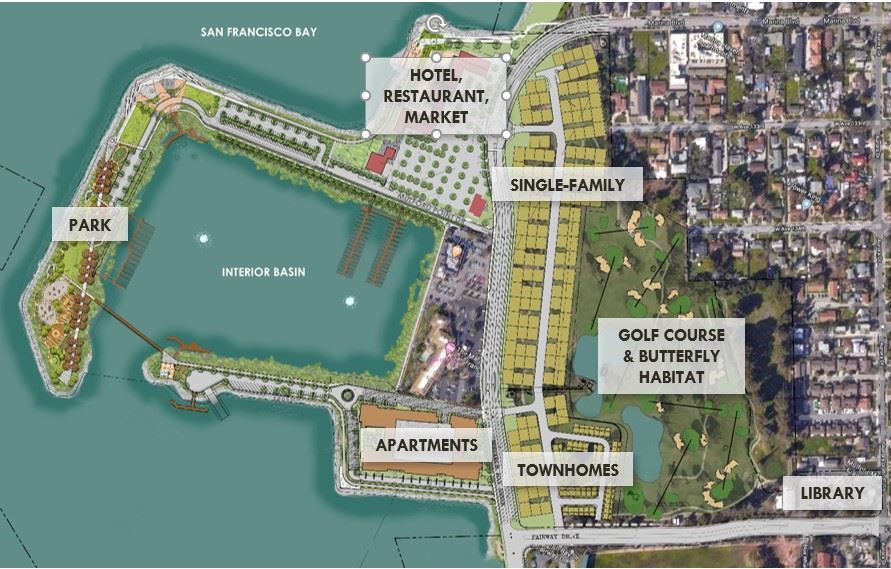 Background:  The Monarch Bay Shoreline Development Project is a planned development along the northern portion of the San Leandro shoreline, which has a vision to create a regional destination that connects the community with the Bay and provides enhanced recreational and community amenities.  The public-private partnership with Cal-Coast Companies is planned to include up to 500 new housing units for families and individuals of varying incomes, a hotel, restaurants, small retail space, new open space and an extension of the San Francisco Bay Trail.  In February 2020, the City Council approved a Disposition and Development Agreement, as well as a Purchase and Sale Agreement for a portion of the 9-hole golf course, and Leases for the other private elements.

Following approval of project agreements in February 2020, the City of San Leandro has continued to work with developer, Cal-Coast Companies, to move the Shoreline project forward. The project is now in the entitlements phase, and project designs and plans are being reviewed and refined prior to public hearings in the summer of 2022.  The entitlements applications will include a wide range of details on the various commercial elements, including the Single Family, Multi-family, Hotel, Restaurant/Banquet, and Market Elements.

The Engineering and Transportation Department also continues to work with project engineers and landscape architects to plan for the new public park.  Key considerations of the design involve communication with the community and native peoples, integration of sea level rise considerations, park maintenance, and sustainable design. Public outreach on the project is planned to begin in the coming months and will engage all members of the community consistent with BCDC environmental justice guidelines.  More information will be provided as the park project progresses.

The existing 9-hole Marina Golf Course will be remodeled and reconstructed as a part of the Shoreline project.  A public meeting to review preliminary design concepts and receive feedback was held on Wednesday, November 18, 2021 at 5:30 PM at the Monarch Bay Golf Course Clubhouse, 13800 Monarch Bay Drive, San Leandro. 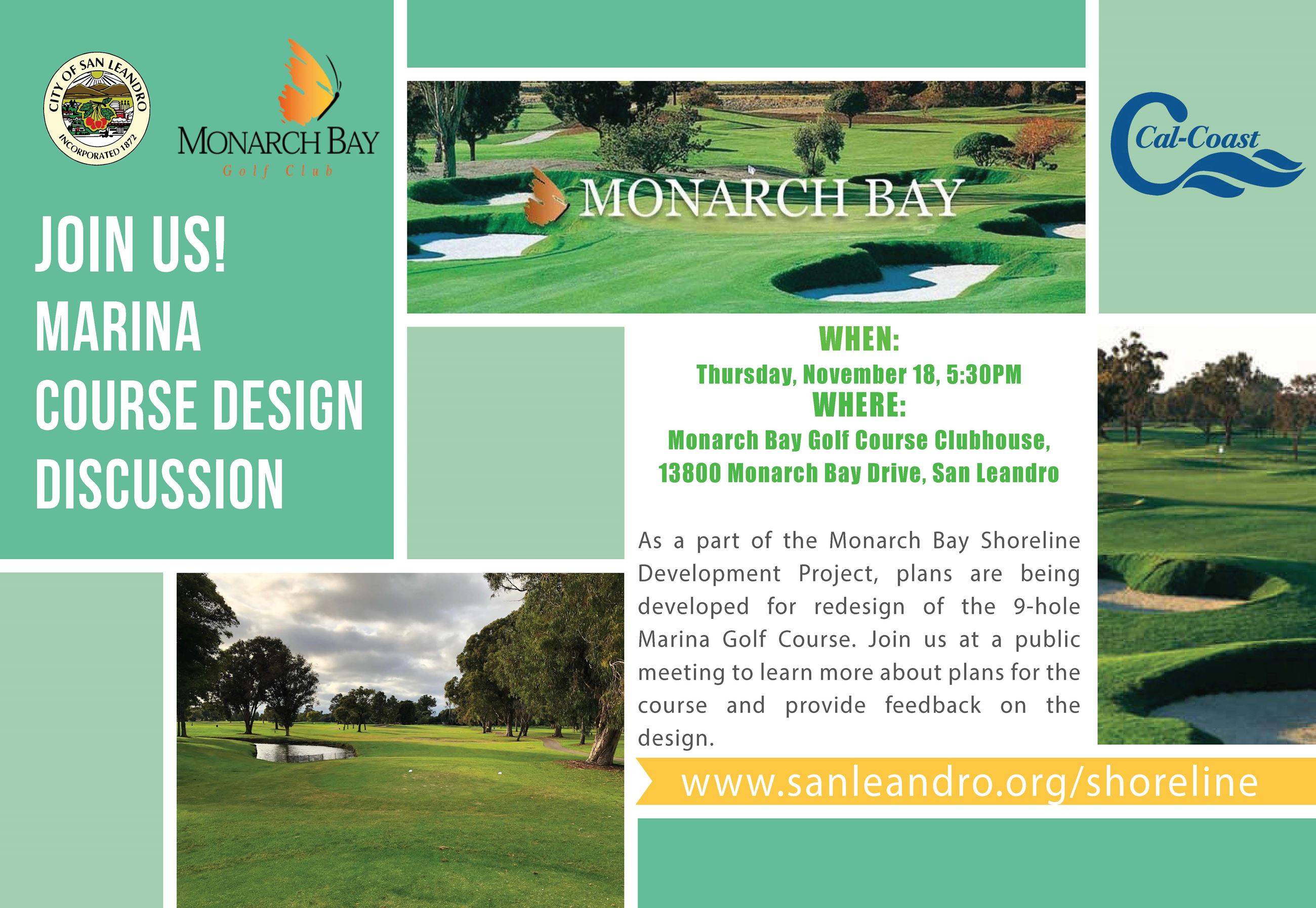 in a February 24, 2020 meeting, the City Council approved a Disposition and Development Agreement with the developer, Cal-Coast, as well as amendments to the General Plan and Zoning Map. The amendments were also approved by the Planning Commission on February 6, 2020.

Cal-Coast Companies will provide an update on the Shoreline Project, including information on project history, current proposal, and next steps. The Monarch Bay Shoreline Development Project is a proposed development along the northern portion of the San Leandro shoreline, which has a vision to create a regional destination that connects the community with the Bay and provides enhanced recreational and community amenities. The current project proposal includes:

Cal-Coast was selected as the master developer for the shoreline in 2008 and has been working with staff and the community for more than a decade. The project has evolved over time, including relocation of proposed buildings from the outer shoreline area, elimination of an office component, and enhancement of the planned community park space. The current concept for the Shoreline was developed in 2017, following feedback from regional agencies and further project and market analysis. Since then, the City has been working with the developer to finalize terms and agreements for the project. The upcoming round of project review focuses on the arrangement between the developer and City, including defining the project scope, delineating the developer and City's responsibilities, and drafting leases and other documents outlining the way in which the property may be developed and utilized over time.

The City Council received a presentation on the project status at its meeting on January 21st at City Hall, during which the public was able to attend to learn more about the project. The community was also invited to learn more at a public informational meeting which was held at in the Titan Auditorium in the Marina Community Center on January 28th. Public Hearings on proposed amendments to the General Plan Land Use Map and Zoning Map for the Shoreline area took place at a Planning Commission meeting on Thursday, February 6, 2020 and will also take place at an upcoming City Council meeting at 7 pm on Monday, February 24, 2020. At its hearing, the City Council will also consider City agreements associated with the project. These meetings will both take place in Council Chambers at City Hall (835 E 14th Street).

On July 20, 2015, the City Council adopted Resolution Number 2015-125 certifying an EIR entitled, "San Leandro Shoreline Development Project EIR (SCH Number 2013072011)." In conjunction with the certification of the Certified EIR, a Mitigation Monitoring and Report Program (MMRP) was adopted for the Project. Pursuant to CEQA and the CEQA Guidelines, the City of San Leandro completed an Addendum to the San Leandro Shoreline Development Project Final Environmental Impact Report (EIR). The Addendum includes an environmental analysis checklist, based on Appendix G of the CEQA Guidelines, which analyzed the changes to the Shoreline Development Project and whether the environmental effects from the proposed project would be any different from those disclosed in the Certified EIR. The Addendum concluded that the proposed project would not result in any new significant impacts or substantially increase the severity of any significant impacts identified in the Certified EIR. No new information of substantial importance was identified and no new mitigation measures would be necessary to reduce significant impacts.

Input from the community has been highly valuable in getting the project to this point. Following these fundamental steps, there will be another round of public meetings and project review, focusing on the design details for the project, including site plan reviews, architectural design review, and park programming and design. Despite numerous hurdles along the way, the project is now closer to a shovel in the ground than ever before.

In an October 9, 2017 Work Session, Cal-Coast Development presented new updates on the Monarch Bay Shoreline Development Project to the City Council. This update follows a prior update on April 3, 2017, when new designs were introduced that incorporated some notable changes, including the removal of buildings from the outer shoreline area and enhancement of park space in these areas, as well as the elimination of office space from the project.
Over the past year, the City and Cal-Coast Development have been working with the Bay Conservation and Development Commission (BCDC) to ensure that the plans developed over the years with significant input from the community meet BCDC's regulations. The changes are largely the result of BCDC's requirement that the project plan for anticipated sea level rise of 65 inches. The mandate that the project raise the building floor an additional 30+ inches resulted in construction costs that were prohibitively high along the outer shoreline area.

Cal-Coast presented some striking graphic renderings, including video of the design concept. The new designs offer more open space and there is a general consensus that the project has been improved. The new concept maintains the 220-room hotel, half of which will be a Hyatt Place and the other half a Hyatt Home, two new restaurants, one of which will host an upstairs banquet facility, an apartment complex, single family and town houses. Additional park land for outdoor activities is provided, as well as a pedestrian promenade and bike lanes that connect the bay trail.

To learn more about project updates and view the October 9 presentation: